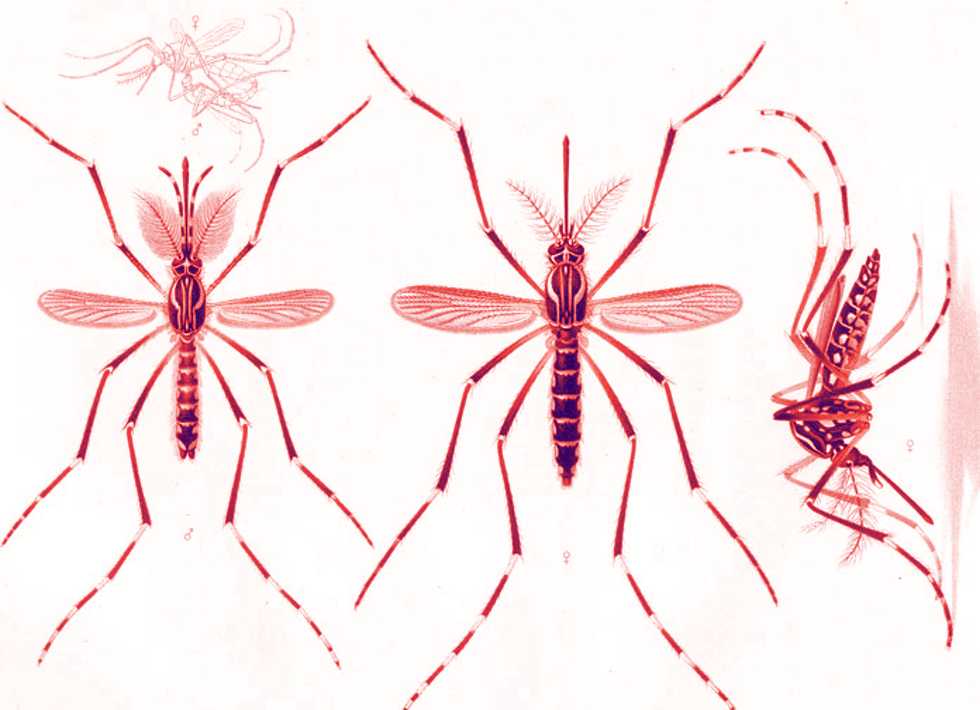 A great portion of the media - and consequently of the population – was taken aback in mid-September when an article published in the journal Scientific Reports stated that there were hybrid genetically modified mosquitoes flying loose and uncontrolled over Brazilian skies. The reason for the scare is easy enough to grasp: the way it was written, the article conveys the idea that the cross of native and GMO mosquitoes might have generated a kind of “super disease spreading” bug.

Even more taken aback was Dr Margareth Capurro, associate professor of the Biomedical School at the University of São Paulo, who co-authored the study. She claims not to have been part of – and least of all approved – the final version of the manuscript. Six Brazilian authors asked the editors for the retraction of the paper right after realizing that the published text was different from the results submitted by the group, and that the previous version of the manuscript – to which they had all agreed - had been altered. Dr Capurro spoke exclusively to Question of Science magazine.

Dr Capurro could not agree more with the criticism from her peers, who argue that the wording of the article is misleading. There is a core statement missing from the text: there are no GM mosquitoes flying over Brazilian Northeastern skies! Needless to say, that the hybrids eventually found in the small town of Jacobina do not pose any threat and are not more capable of transmitting disease than any other ordinary mosquito, nor are they any more resistant to insecticides!

According to Capurro, this was part of the monitoring plan, just as required by CTNbio (Brazilian National Committee for Biosafety), to complete the process of evaluation of the OX513A mosquito., developed to help control the numbers of Aedes spin Jacobina. The authors show a gene flow, from the GM mosquito to the wildtype mosquito, meaning that parts of the OX513A genome could be found in the wild population 27 months after the release.

OX513A was released in the city of Jacobina, in Northeastern Brazil, during 2013-15, in a field trial approved by CTNbio, after the Committee evaluated safety and efficacy, based on papers and reports produced by the same Brazilian authors of the Scientific reports paper. The trial was a success, reducing the overall population by 95%. After the release stopped, the population rebounded to the original numbers, which was also completely anticipated by the group and Oxitec.

OX513A males carry an artificially designed gene, that stops the mosquito’s offspring from developing into adults. This is how it works:  when they mate with wildtype females, the modified males will eventually reduce the population, since the next generation will be unable to grow and leave descendants. This modified artificial gene is called a “transgene”, and carries a “turn-off” system, so it vanishes really fast from the population. It is designed to be a lethal gene,  precisely to prevent that GM mosquitoes linger about for too long. Their only job is to mate and make sure that the next generation is doomed. After that, they are quickly cleared from the population thanks to the lethality gene.

The recent Scientific Reports paper shows that parts of OX513A genome were found in wildtype mosquitoes in the State of Bahia. But the wording of the paper, such as it was published, fails to mention that none of these “genome parts” was from genetically modified genes. In other words, it is all about ordinary natural genes that can be found in ordinary natural mosquitoes.

The result itself is fairly common but is presented as “unexpected” in the published paper. Capurro says she had no knowledge of that “conclusion” and does not agree to it. There are actually no data to support that hypothesis, that the gene flow could have created “vigorous” or insecticide-resistant hybrids.

If on one hand, the scientific data of the paper are solid – there really was a gene flow that generated a small degree of hybrids, the speculations on the supposed vigor and insecticide resistance are no more than well, speculations, that have no place in science, and can lead to serious consequences for Health and Scientific public policies.

Again, there is absolutely no data on the alleged vigor of the hybrid, and the OX513A strain was demonstrated to be sensitive to all kinds of known insecticides, as published here, in a previous paper by the same authors. There is nothing unexpected about the results: it was already known that up to 4% of the males escaped the lethal gene and developed into adults. Some degree of mating with the local population with healthy offspring was completely anticipated and poses no surprise.  It does not mean, however, that the local mosquitoes are now transgenic, or that GM mosquitoes now took over  the population.

Jeffrey Powell, senior author of the paper, told the German news outlet Deutsche Welle, that the results are dangerous precisely because they are unexpected, and that the hybrid could be more vigorous. He also stresses the importance of surveillance after this kind of field trial.

What he does not mention is that the data shows no transgenes in the population. In other words,there are no GM mosquitoes flying lose and uncontrolled over Brazilian skies. The data also shows that the hybrids are no different from the local population in their ability to transmit disease. And the need for surveillance and follow up was the reason for this work in the first place. Capurro says that Powell chose not to explain the data and included all the scary speculations without  discussing the final version of the manuscript with the rest of the group.

There is no reason to believe that these hybrids could me more “vigorous”, hybrids occur in Nature all the time, and Aedesis not an endogenous Brazilian species. As for insecticide resistance, the Cuban and Mexican strains used to develop OX513A were chosen precisely for being more – not less - susceptible to these drugs.

Dr Capurro explains  that the chosen strain is actually a hybrid of Mexican, Venezuelan and Northern Brazil mosquitoes. It is a laboratory raised strain, much more fragile and sensitive to all kinds of insecticides. She challenges Powell’s remarks on vigor and resistance and claims that this is not what the data shows.

According to Dr Paulo Andrade, full professor at the Federal University of Pernambuco, Northeastern Brazil,  “the paper is irresponsible and speculative regarding risk communication and uses hyped language. The title itself is misleading, after all, there was no actual gene transfer, just allelic recombination. The use of the expression “gene transfer” speaks to a popular demand but lacks science”.

The “alleles” Andrade refers to are genetic variations within the same gene, within the same species. They are located in the same spot at the chromosomes. For instance, we have different alleles for eye color. Whenever there is sexual reproduction, there is allelic exchange and recombination, this is absolutely normal and excepted. For each gene in the human genome, we get one allele from our mother and one from our father. Allelic exchange is not the same as introducing new genes into a species.

Common to all hyped pieces of news is precisely the confusion foreseen by Andrade: the speculative hyped language led to misinformation. Media has been talking about gene transfer and GMOs out of control – clearly not the case – and blindly follows the hype of the “robust insecticide resistant” hybrid.

Francisco Aragão, senior research fellow at Embrapa Recursos Genéticos e Biotecnologia (Biotech and Genetics department of the State National Research Centre for Agriculture) exposes the unscientific tone of the paper: “Although the results are interesting, they are not at all surprising. The problem lies on the speculative tone on the changes observed in the mosquito population, statements were made in a hasty unscientific way. The title is misleading enough that the careless reader can easily confuse genes and transgenes. There are no transgenic mosquitoes flying unexpectedly over Brazilian skies”.

The risk is actually smaller  for the careless reader than it is to the careless journalist, who, by lack of knowledge or cognitive bias, thinks he understands what he read and translates it to the general public as “super bug”, “GMOs out of control” or “unforeseen consequences”. None of the news outlet pieces published so far in Brazil tried to talk to a geneticist to evaluate the paper’s merit. Quite the opposite, they interviewed several known anti-GMO professionals.

Genetic modification techniques have been used in agriculture and medicine for years. Before going into the market, they are submitted to rigorous evaluations, conducted in a case by case manner: no Health authority in Brazil would approve and release GMOs based on suppositions or the word of the manufacturer.

Misconceptions in the paper at hand are so many and so serious, with such dangerous outcomes, that the journal added an Editor’s note: “Editor's Note: readers are alerted that the conclusions of this paper are subject to criticisms that are being considered by editors. A further editorial response will follow the resolution of these issues”.

Natalia Verza Ferreira, CEO of Oxitec in Brazil, says she is sorry to see “irresponsible statements and inconsistent studies” published in “indexed journals, just to inspire hyped headlines”. She states that “none of these results comes as a surprise to Oxitec or to the regulatory agencies”.

Capurro and her team are going to publish the follow up data, with the adequate conclusions, in a different journal, without Powell’s participation. She stresses that the original version of the manuscript only described the follow up results, and these were as favorable and predictable  as can be.

Biotechnology is probably one of the most prominent  tools for a sustainable future, to secure less damage to the environment and more disease control in agriculture, reducing use of water, land and pesticides. Communicating the safety of these techniques is hard enough. We could do without the “friendly fire”.

Jeffrey Powell was contacted by the magazine Question of Science team but has not replied yet. This piece will be updated when and if he responds.

Natalia Pasternak is a biologist, founder and president of the Question of Science Institute