Diluting UK taxpayer spending on homeopathy, until it is just a memory 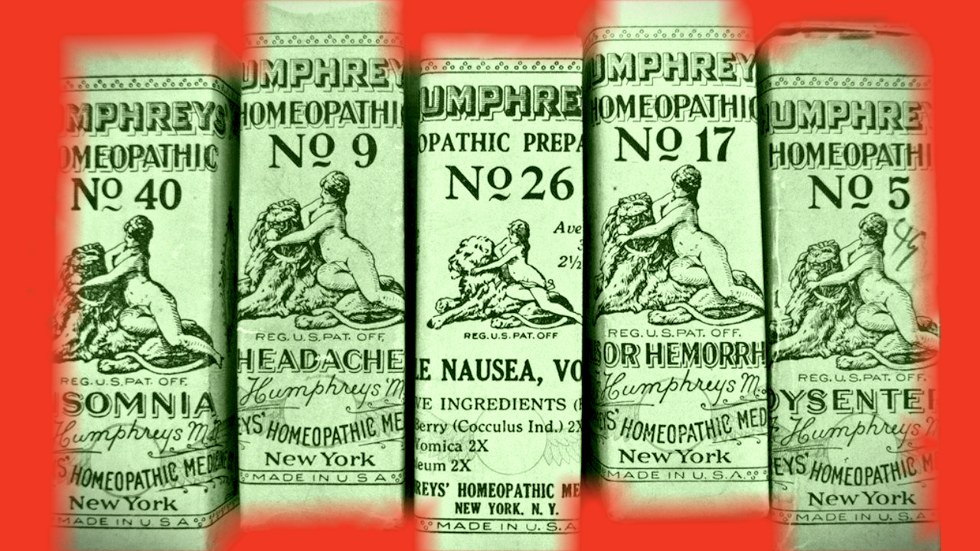 Since the creation of the National Health Service – the UK’s government-funded healthcare system, homeopathy has enjoyed a position of privilege: when the service came to be founded in 1948, the UK already had a number of homeopathic hospitals, some of which were over a century old, so it seemed natural that this well-established form of alternative medicine would be included in the new healthcare system. As the decades went by, and as more and more clinical trials demonstrated homeopathic remedies to be ineffective, NHS homeopathy came under increased scrutiny… but its long-standing reputation and the support it received from the UK’s Royal Family helped rebuff most serious attempts to end funding for this pseudo-therapy.

It was against this backdrop that, in 2014, the Good Thinking Society sought to investigate and challenge the continued taxpayer funding for homeopathy, and in doing so it became clear that our first challenge would be to understand precisely where homeopathy was being provided, who made the decisions to renew supply contracts, and just how much money was being spent on providing these remedies.

Somewhat surprisingly, given the way in which funding decisions are devolved to local health bodies, there was actually nobody in the UK – neither in the NHS, the Department of Health, or in any other official government body – who could say for certain how much the UK spent on homeopathic treatments. Local health bodies made decisions to spend local resources on the local service, and it was nobody’s job to collate those figures to put together a national picture. So, quite quickly, it became clear that if we were to have any success in our challenge, I would have to undertake that job for myself.

Fortunately, the UK has a robust and powerful Freedom of Information law, which allowed me to ask each of the 237 health boards in the UK to provide me information on how much money they had spent on providing homeopathic remedies, and after around six months of correspondence, prompting, challenging and reminding bodies of their legal obligation to be transparent, I was able to put together the full picture.

My results painted a clear picture: homeopathy funding in the UK was very closely tied to the locations of the remaining homeopathic hospitals, in London, Liverpool, Bristol and Glasgow. Areas surrounding those cities spent close to £5 million annually to send patients to homeopathy consultations at those hospitals, and to provide their remedies. Yet, in the areas of the country more than 30 miles from one of those hospitals, no money was spent on homeopathy. Clearly, to tackle NHS homeopathy required a closer scrutiny of those particular facilities.

Fortunately, once we knew which CCGs were spending their money on homeopathy, we were able to pay them close attention, allowing us to wait until a contract to supply homeopathy was up for review. Given that these were taxpayer-funded organisations, any decision to spend taxpayer funds must be carried out legally, and with care to ensure money is not wasted: as the UK government had previously concluded that homeopathy was not effective for any condition, it seemed apparent to us that a decision to spend valuable resources to supply an ineffective treatment could not be considered a responsible use of funds.

As it happens, it was in my hometown of Liverpool that was first to renew their homeopathy contract, opening a window of opportunity for Good Thinking, working closely with public law firm Bindmans LLP, to challenge the contract renewal. In February 2015, we wrote to Liverpool CCG to explain why we believed their decision to continue spending money on homeopathy was unlawful; in April 2015, rather than argue their case in court, Liverpool CCG reversed their contract decision, and held a public consultation to ask the people of Liverpool whether funding homeopathy was something they felt strongly about.

This was a tremendous opportunity for us, as typically public consultations such as this attract plenty of responses from people passionate about homeopathy – including patients of the service, local professional homeopaths, and others who have been encouraged to take part by pro-homeopathy groups – but relatively few responses from scientists and skeptics, who might not notice that the consultation is taking place.

Fortunately, as a charity designed to counter pseudoscience, we were well placed to encourage local scientists, doctors, skeptics and critical thinkers to offer their views to the consultation. I was able to search online to find the names and work addresses of all General Practitioners in the area, and wrote to them to ask them to take the time to respond to the consultation. I searched the websites of the local universities for academics within the departments of medicine, chemistry, pharmacology, physics and more, to ask them to take part. In spending the time to find communities who might be interested in the consultation, but who might not have seen that it was taking place, I was able to drive support for a pro-science position, to balance the lobbying of homeopaths and related special interest groups.

The effect was significant: in June 2016, Liverpool CCG ended all funding for homeopathy. This was a great victory for critical thinking and skepticism in Liverpool, but it was also a platform on which we could build: I wrote to every other CCG who funded homeopathy, to draw their attention to our legal challenge to Liverpool, and Liverpool’s response, making it clear that we felt there was no legally-defensible argument for funding homeopathy on the NHS, and that we would be keen to know when any other CCG was due to renew their homeopathy contracts.

If Liverpool was the first success, the next followed soon afterward: in October 2016, Liverpool’s neighbour in the North West, The Wirral, ended their homeopathy funding, citing the “overwhelming consensus” of experts and local residents backing the decision. Public consultations in the areas surrounding Bristol followed in August 2017, with all homeopathy funding ending in the South West of England by August 2018.

Meanwhile, I wrote to the 17 CCGs in London, whose contract with the Royal London Hospital for Integrated Medicine (RLHIM) made it unclear whether they were spending any money on homeopathy, encouraging them to press for greater transparency on how their resources were being spent. In late 2017, London CCGs formally audited every patient to attend the RLHIM, giving a clear picture of how many patients were receiving homeopathy. As a result, in March 2018, the 17 London CCGs banned any of their resources from being spent on homeopathic consultations and remedies. Routine NHS homeopathy in England had come to an end, seventy years after it had first been funded, and just four years after we first began to challenge it. Along the way, health boards in Wales ended their sparse funding for homeopathy, Northern Ireland confirmed they had not funded it at all, and health boards in Scotland significantly reduced their spending… although it is not yet zero, and our work continues in Scotland to this day.

While much of this work involved correspondence with government bodies and health boards, sifting through policy documents and contracts, and responding to public consultations, we have also been keen throughout the campaign to conduct of our work as much as possible in the public eye, and in the media. Not only has this allowed us to demonstrate the motivations of our campaign and to try to head off the inevitable false accusations of being funded by pharmaceutical companies and driven by ill intent, but it has also allowed us to remind the public of the scientific realities of homeopathy.

For many years, I believe, homeopathy was given a free pass in the UK in part because of the low levels of understanding the British public had about what homeopathy is and what it involves. Studies have demonstrated that people routinely confuse homeopathic medicine with herbal medicine, or with natural medicine, without fulling understanding that these are inert sugar pills, with any active ingredient having been diluted away long before those pills made it to any patients.

With that in mind, at each stage of our campaign, we worked closely with journalists across the UK media, resulting in more than 100 individual pieces of coverage since 2014: including prominent interviews on flagship BBC TV and Radio news programmes, features in broadsheet newspapers, and coverage in online and print tabloids. In seeding and driving so much coverage, in such varied outlets across the news spectrum, we were able to underline some of our key messages: that homeopathy has been demonstrated to be effective, that every single penny spent on these ineffective treatments is money that could be spent on something else, and that there is an organisation (and a broader community, in the UK and beyond) who are passionate about science and about challenging pseudoscience.

In looking back at the five years our NHS Homeopathy campaign has been active so far, our media strategy has been a key part of our success, but equally important has been our ability to break this national issue down into a series of individual local decisions, and to tackle each separately, using the momentum of a success in one area to add weight to our efforts in another region. We’ve spent time to understand the health bodies that make the decisions on funding pseudoscientific treatments, how those decisions are structured, and where the points of challenge can be found. And by building a network of supporters local to each region – even when that includes spending hours to manually create contact lists of doctors, veterinary surgeons, academics, scientists, and community groups – we were able to guide local interest and enthusiasm to where it could really make a difference.

Our campaign to end NHS funding for homeopathy isn’t quite over yet – there’s still funding in Scotland to challenge, and we will need to monitor providers in London to ensure the latest funding instructions are carried out fully. But given that homeopathy has been provided by the NHS for seventy years, and our campaign has only been running for five years so far, we’ve certainly come further than we imagined, and far quicker than we would have thought possible, too.

Michael Marshall is project director of the Good Thinking Society, a pro-science charity which seeks to challenge pseudoscience and promote evidence-based medicine